Volkswagen has revealed UK prices and specs for the new up! GTI – the latest member of the GTI family and the first truly hot take on the firm’s city car. Both three- and five-door versions will hit showrooms in Britain, priced from £13,750 and £14,150 respectively. The wait to get one won’t be too long either – order books open on 6 February, with first deliveries scheduled towards the end of that month. Final specifications will be confirmed shortly, but by and large we now know what buyers can expect.

The 113bhp served up by the turbocharged three-cylinder is combined with 200Nm of torque, available from 2,000rpm. The engine is one of Volkswagen’s new generation 1.0-litre TSI stop/start units creeping into new cars across the VW Group’s various brands. Now though, it’s the beating heart of the fastest up! yet. It should deliver a classic three-cylinder thrum, but a sound actuator means that those in the cabin will get a synthetic exhaust note piped through the speakers.

Power is sent to the front wheels via a six-speed manual gearbox, and the newest, smallest member of Volkswagen’s GTI family can sprint from 0-62mph in 8.8 seconds and will go on to a claimed top speed of 122mph. The up! GTI is one of the first Volkswagen cars to be tested under new WLTP and RDE fuel economy and emissions rules. VW claims that it’s capable of delivering between 49.6mpg to 50.4mpg depending on spec, with CO2 emissions between 127-129g/km.

Volkswagen leaves no doubt as to how it sees the new up! GTI – it’s a spiritual successor to the original Mk1 Golf GTI. The two cars are separated by 42 years, but on paper, some performance parallels are to be found. The original 1976 Golf GTI boasted 108bhp, enabling 0-62mph in nine seconds flat and a top speed of 113mph. Both cars have a sub-one-tonne kerb weight too, but the new up! GTI is slightly portlier, weighing 997kg to the Golf’s 810kg.

Some visual crossovers between the two models exist too – classic GTI paint colours such as ‘tornado red’ and ‘pure white’ will be available, alongside metallic silver and black, plus a new ‘costa azul’ blue tint. The biggest giveaway, though, is in the cabin – the up! GTI will come with trademark GTI tartan seat upholstery. A leather sports steering wheel and a GTI gear knob are also found, while an infotainment system, air-conditioning and ambient lighting will be standard. 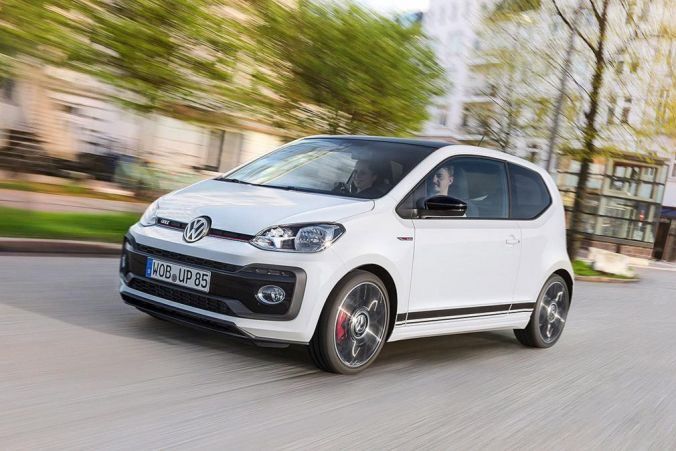 GTI badging at the front and rear is combined with the classic red radiator grille stripe, while the grille itself is a honeycomb pattern and finished in gloss black. Black stripes run down the bottom side sills, and new 17-inch alloy wheels are wedged underneath the wheel arches.

Elsewhere, the mirror caps are finished in gloss black, while around the back, the up! GTI gains a larger roof edge spoiler and a red stripe across the hatch lid. The new spoiler isn’t just for show – VW says it really is there to provide extra downforce over the rear axle. New, ‘sports’ running gear means the whole car sits 15mm lower than the regular version of the city car.

As standard, UK cars will be fitted with a five-inch colour infotainment and radio display complete with USB connectivity, a six-speaker stereo system, plus air-conditioning, heated seats, electrically adjustable and heated mirrors and front fog lamps with a static cornering function. Additional standard and optional equipment will be confirmed before order books open. 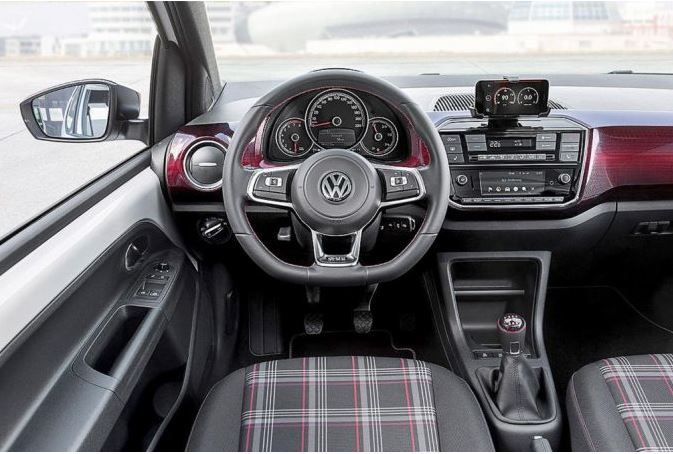